Several weeks ago, we were at Cue Studios in Falls Church to record several of our songs. Here are the results. Included are the tunes Maintenant, Menilmontant, La samba de mon coeur qui bat, and Consider Me Gone. Click on the links BELOW to hear them. (Note: the songs on the right side of this page are some of our own home-made recordings, so be sure to click the one’s below for the professional recordings.)

Huge thanks to guest artist Rod Goad who performed on drums and percussion and Ken Schubert, Chief Engineer at Cue Studios, who took care of all the technical details to produce these recordings.

French Coast Café is Carole Bausell on vocals, David Savage on cornet and harmonica, Duane Siler on guitar, and Larry Golfer on bass.

We hope you enjoy these songs. 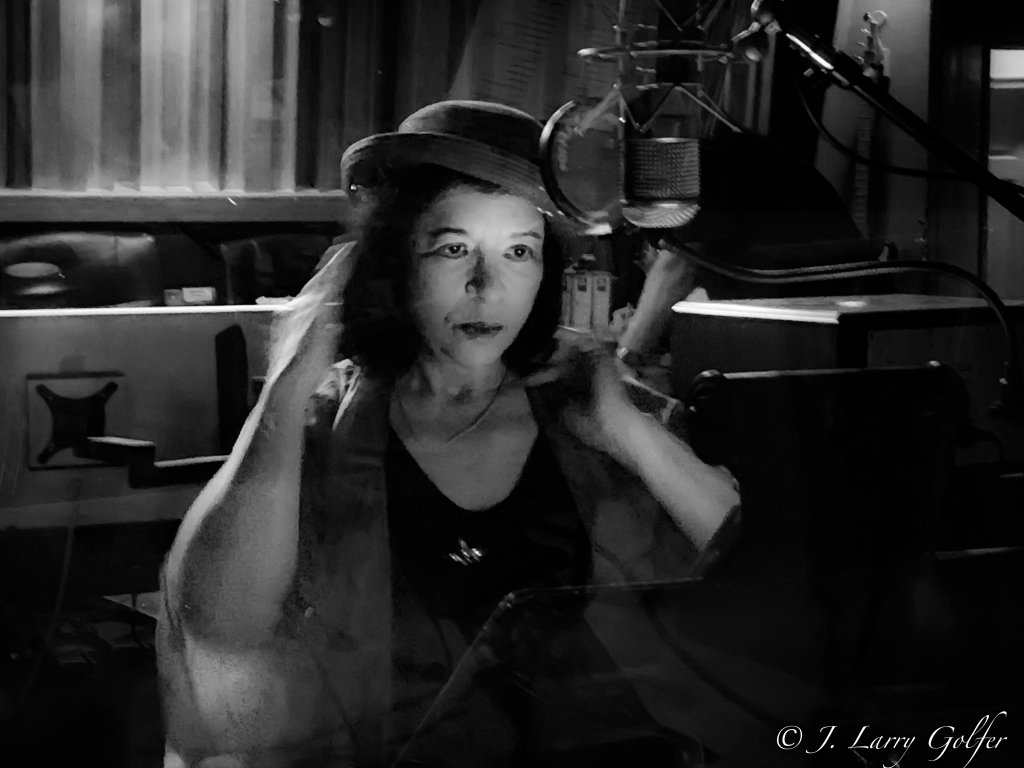 French Coast Cafe had its first recording session at Cue Studios in Falls Church, VA. Ron Goad was our guest artist on percussion. Here are some photos of that session. Photography by J. Larry Golfer.

We were pleased to welcome Robert Lighthouse again as the featured act of a house concert here at the “Offshore Lounge” on October 21. Opening acts included Cajun Malheur with Chris Smith and Will May, Americana songwriter/guitarist Alan Partlow, our band French Coast Cafe, and the Stewart Sisters.

Robert followed with a great set of his blues tunes and some of his original pieces including “If I Were the President,” “She’s the One I Love,” and “Planting Season.”

Click on the House Concert link on the upper right of this post to hear us playing three of our favorite tunes: “You Hung the Moon,” a piece written by our guitarist Duane Siler; the Django Reinhardt tune “Nuages,” and our version of Sting’s “Consider Me Gone.”

Our next house concert will be featuring the Stewart Sisters, some time in early 2019. 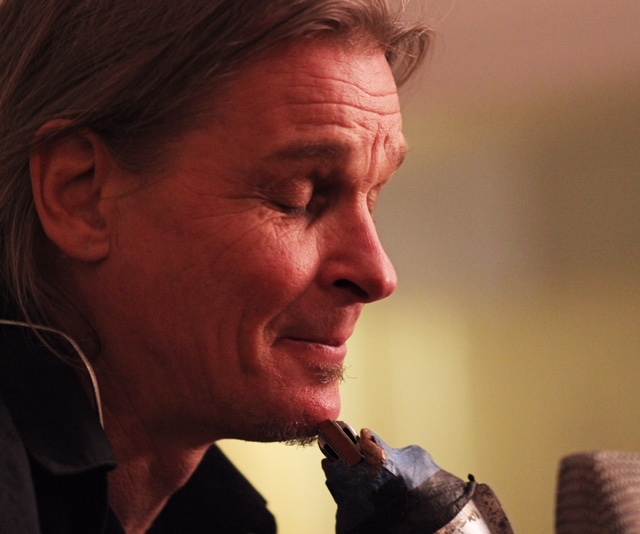 Internationally-recognized Swedish bluesman Robert Lighthouse brought down the “house” at a recent concert in Falls Church, Virginia. Hosts Carole Bausell and Larry Golfer, vocalist/guitarist and bassist, along with guitarist/songwriter Duane Siler,  opened the evening with their band, French Coast Café at their “Offshore Lounge” with their unique sounds of gypsy jazz, bossa nova, samba and Duane’s Americana originals  (translated into French by Carole). 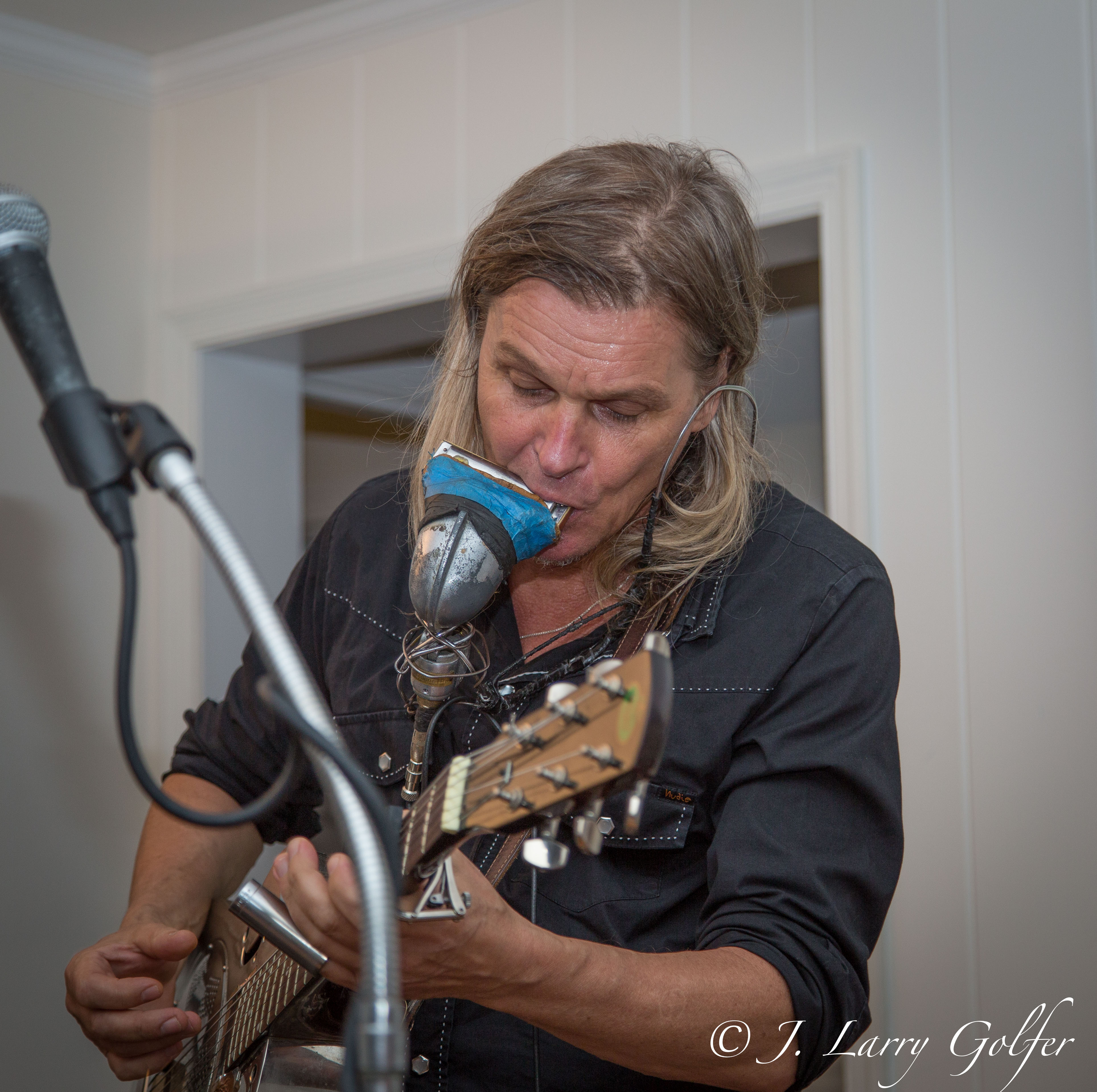 We were pleased to have guest Rob Petrie of Cold Hard Cash and the Petrified Pickers, join in with his rendition of “Folsom Prison Blues.” 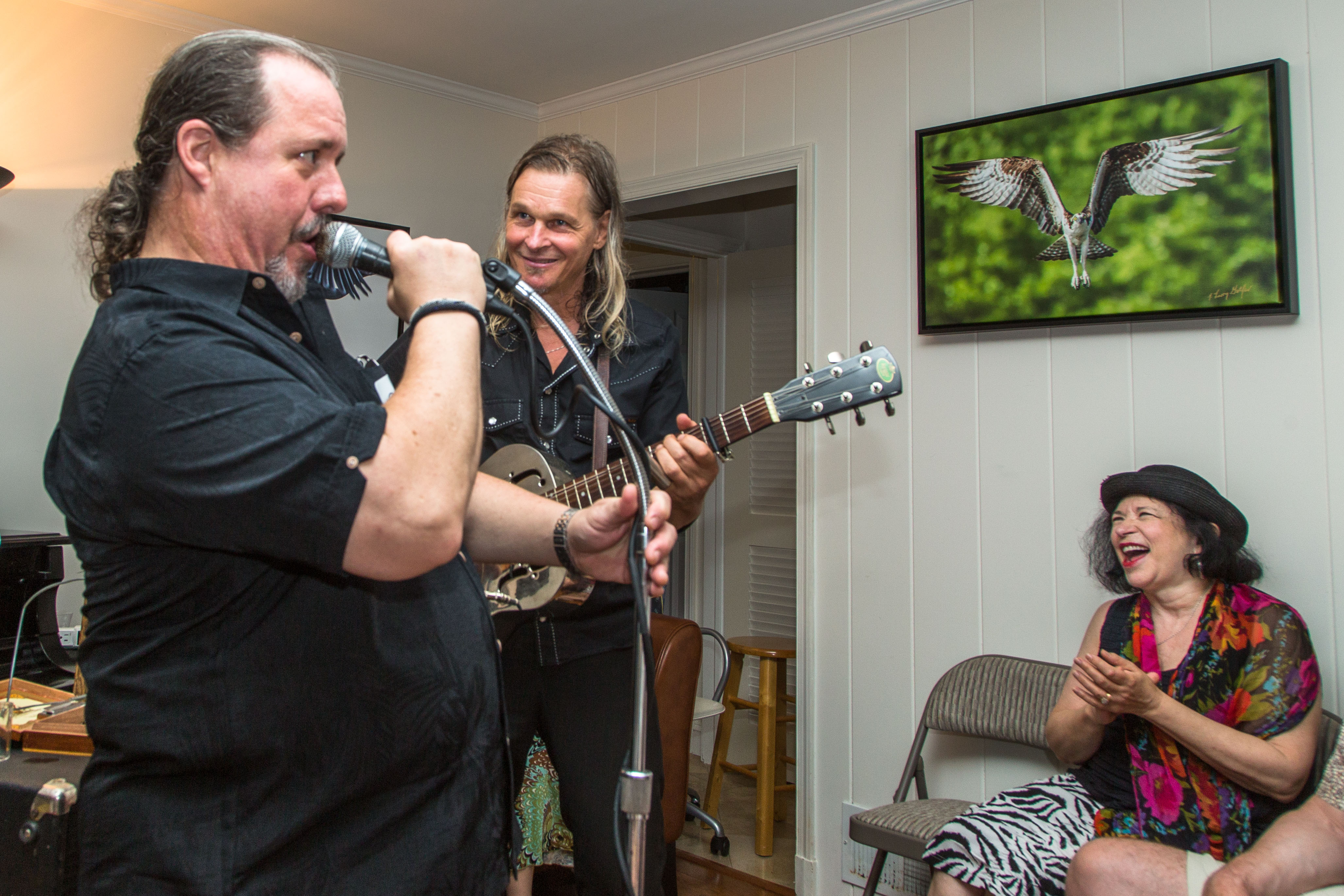 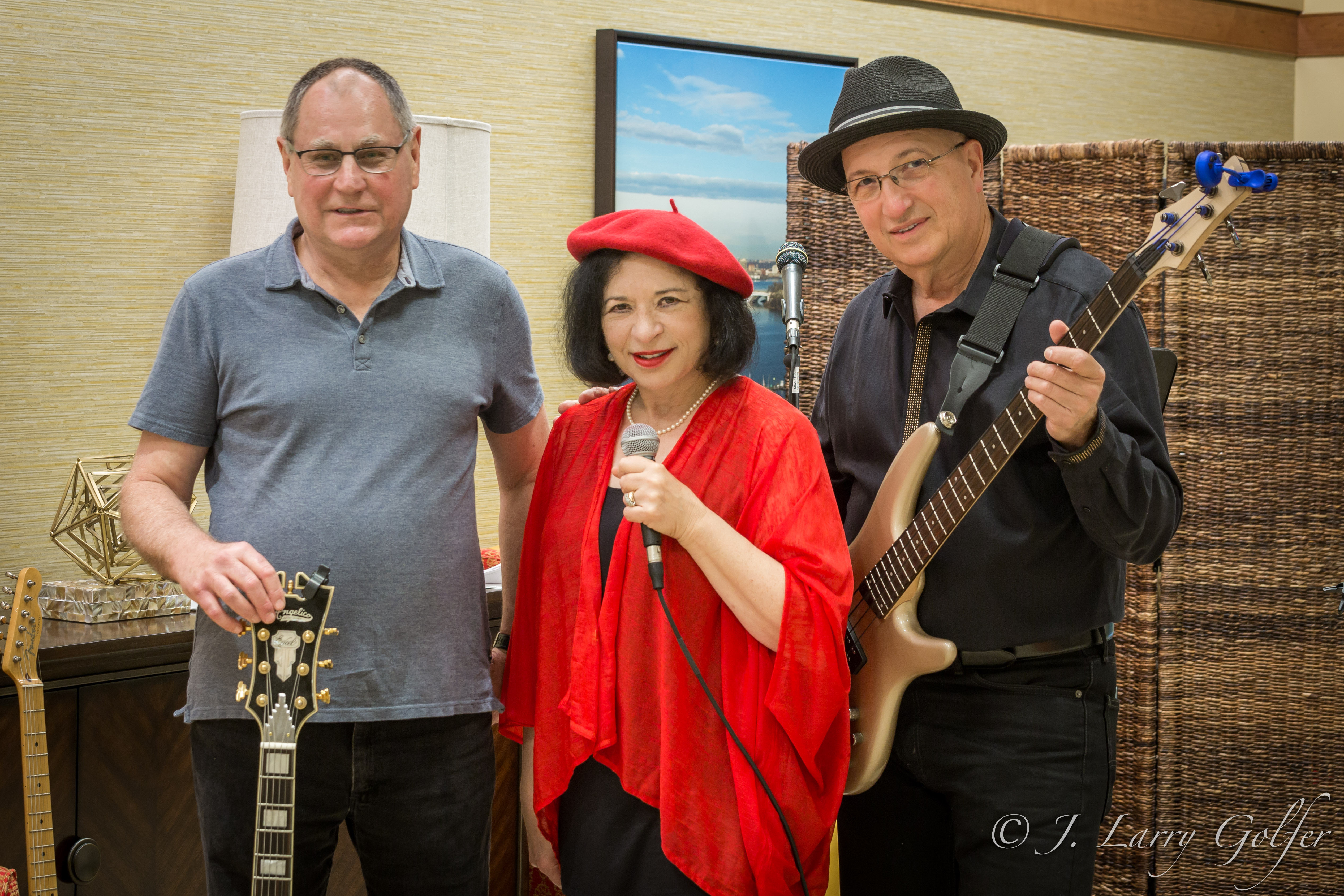 French Coast Cafe vocalist Carole Bausell entertained the crowd with her unique vocal stylings on tunes in both French and English such as La Mer (“The Sea”), made famous in the states by Bobby Darin, Nuages (Clouds) by Django Reinhart, and Autumn Leaves, originally done in French as “Les Feuilles Mortes,” as well as several beloved numbers by the great Edith Piaf.

Many of the exhibiting artists were on hand at the reception to talk to visitors about their art, including French Coast Cafe bassist Larry Golfer. 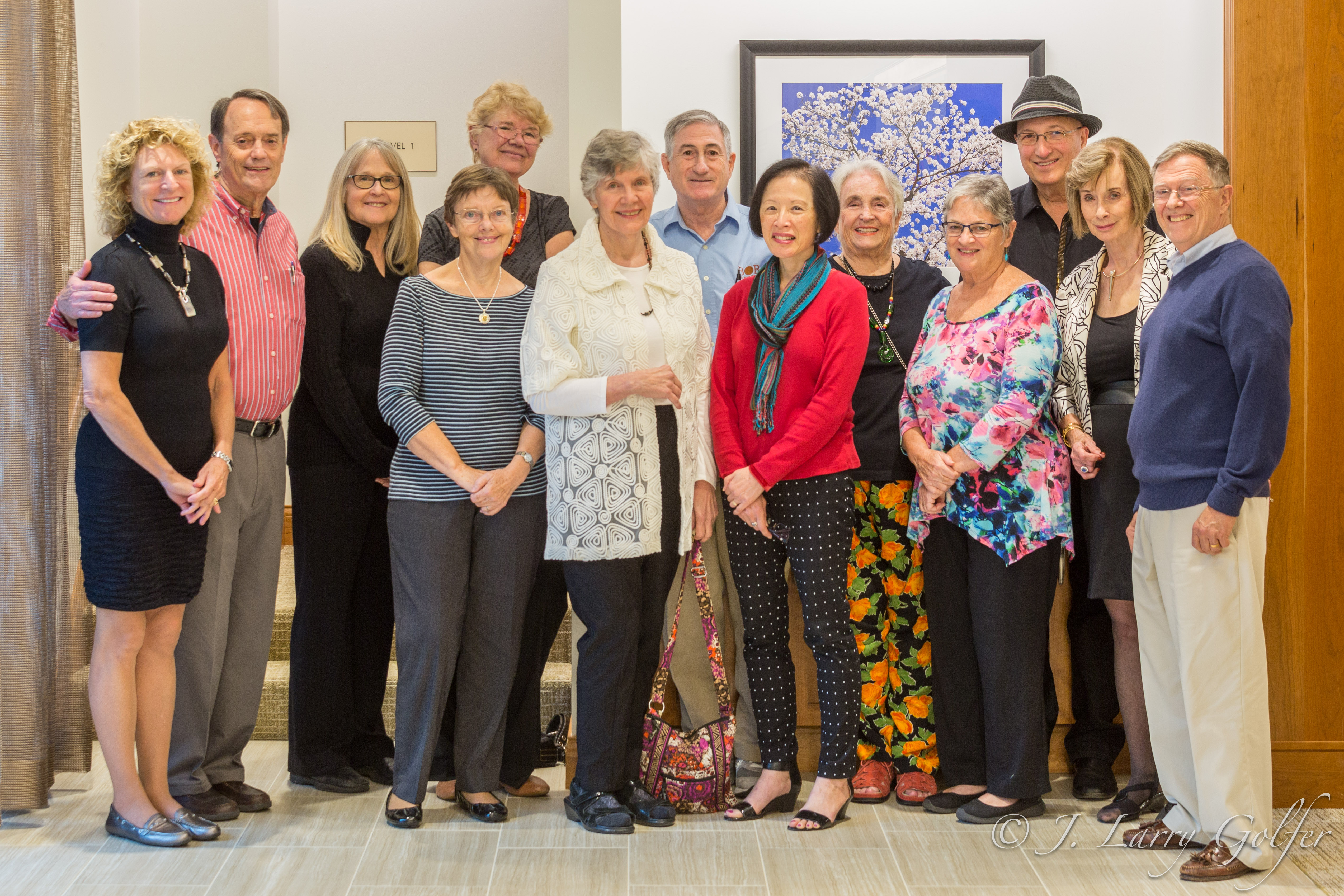 French Coast Cafe’s next gig will be at Beans in the Belfry, a unique coffee house in an historic restored church in Brunswick, Maryland. Come out at see us on November 3 at 7pm.

Come hear our band perform at the Epicure Cafe in Fairfax on Wednesday, June 22nd.

We are the opening act in a lineup of bands and play a 4-song set starting at 7:30 p.m. It’s all billed as Ron Goad’s Songwriters Association of Washington Music Variety Showcase.

Try to get there a little early as we start promptly, and feel free to bring friends. All of the acts are good.

Hope that you can join us!

During our recent holiday in  Puerto, Rico, we dined at Carli’s Cafe in Old San Juan. Carli Munoz, the cafe owner, was the keyboardist for the Beachboys from 1970-1980. He’s been a jazz pianist ever since. We had met Carli several years ago and I had photographed him them. See this link: https://www.flickr.com/ph…/larrygol/albums/72157640946553224

Visiting with Carli before he  went on, we told him we had started a musical trio and Carole was the vocalist. After we enjoyed the first set of his wonderful, lush piano playing, during a break, Carole was invited to come up and sing our French-English version of “Autumn Leaves.”  It was a thrill for Carole and the audience loved her.

Here are some photos from that evening: 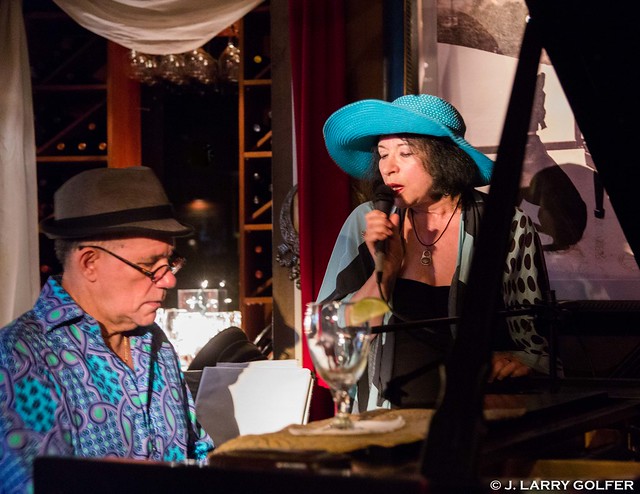 We had a group of French speaking and Francophile neighbors visit us for an open rehearsal over the holidays where we played a mix of songs — from covers of Edith Piaf to contemporary French pop from France and Canada to one of our favorites, Fats Domino’s “Hello Josephine” with Carole’s French lyrics. We also played several original tunes written by our guitarist, Duane. 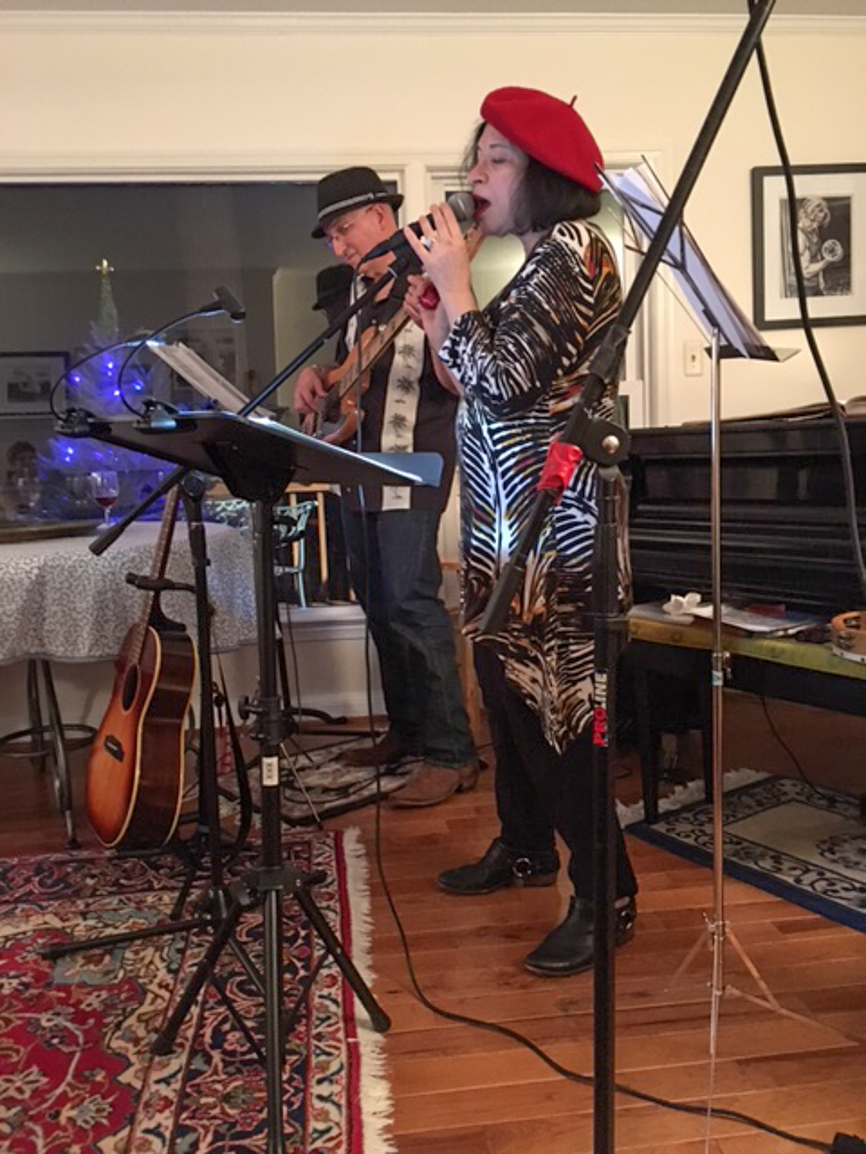 We’ve been recording some of our tunes and our rendition of Yannick Noah’s “Mon Dernier Amour” forms the musical basis for this promo video just released. Have a listen at this link: Presenting “French Coast Café.”.

Coming up, we’re looking forward to new gigs and will be going for open mike sessions at local clubs, and hopefully, getting invited  as a featured act at a local club or two.

French Coast Café performed at a recent party in Lake Barcroft at a beautiful lakeside home. The weather was gorgeous, as it has been this past week, and the group played songs from Edith Piaf, Pink Martini, Canadian songstress Arianne Moffat (“Je Veux Tout“) and other tunes in their French café style. Looking forward to our next gig.

I Lost My Baby